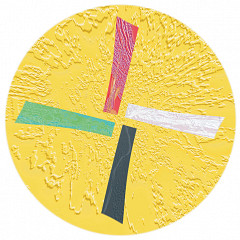 •• Fusion: Last element in the Tao cycle, the Earth is the place for transformation and fusion, it is the melting pot of the other materials. It is also the last step of knowledge: that of the synthesis between things. Paradoxically — once again sight is deceiving — it is more about Energy than Matter, of primeval energy in two forms: radiation and particles.

They go through a common process that emphasizes intermodulations, transformations, and, once ‘remusicalized’ and changed in time by the play-sequence technique, they generate strange similarities: from Diversity to Unity. Everything is in everything else: Tao.

•• Form: The general form is a double conical spiral whose base is located in the centre: from creation (radiation, particles) — manifestation of matter and rhythm — to Ω.

It is in constant evolution: variations. The descending fifth (sky/earth of the Tao) constitutes its central tonic axis. The form also integrates 8-track spatialization as a criterion for evolution: space is structured by geometrical figures.

These figures, as well as all the internal movements that run through them, are linked to the temporal structure of the piece, which is based in external time on a gradual lengthening of each of the parts joined together, and on a gradual speeding up of internal (psychological) time.

•• Anecdote: The moral (Pierre Schaeffer’s “Leçon de chose”) to be gained from the experience of Terre (Earth) is the following: the internal energy of a sound, its movement, its morphology, can resist for a long time to any type of transformation process, even cumulative processes. A mark, a trace, of the original remains. Perhaps only the dissociation of a sound into elements arbitrarily redistributed in time can reduce that given sound to a neutral object, fit for any use, a note.

•• Spatialization: The concert 8-track version (of 1991) requires a minimum of 12 or 16 loudspeakers set up in two groups, one of them placed in a frontal position (tracks 5-8) and the other one around the public (tracks 1-4) — in a traditional concert hall —, or one in an inner ring facing the public and the other surrounding the public seated in a circle — in an appropriate setting or outdoors.

Terre [Earth] was realized at the GRM in their SYTER and 123 studios (Paris, France), and mixed at the Métamorphoses d’Orphée studio of Musiques & Recherches in Ohain (Belgium). It premiered on January 30, 1991 in a concert of the Clair de terre series organized by the Association pour la création et la recherche électroacoustiques du Québec (ACREQ), under the direction of Robert Normandeau, at the Planétarium de Montréal (Québec). The work was commissioned by the Ina-GRM. Many thanks to Yann Geslin and Daniel Teruggi for their essential and persevering help.