Sam Shalabi (oud / guitar: Montréal / Cairo) is an Egyptian-Canadian composer and improviser, living between Montréal, Québec and Cairo, Egypt. Beginning in punk rock in the late 70s,his work has evolved into a fusion of experimental, modern Arabic Music that incorporates traditional Arabic, shaabi, noise, classical, text, free improvisation and jazz. He has released 5 solo albums (including On Hashish — a musical mediation on German writer Walter Benjamin, Osama, an audio collage on arabophobia in the wake of 9/11 and his most recent Music for Arabs), 5 albums with Shalabi Effect, a free improvisation quartet that bridges western psychedelic music and Arabic Maquam (scales) and 3 albums with Land Of Kush (an experimental 30 member orchestra, for which he composes).

He has appeared on over 30 albums and toured Europe, North America and North Africa.

Upcoming projects include the release of the 6th Shalabi Effect album, a duo album with Stefan Christoff, two albums on the Italian label Sagittarius, with Beirut, Turkish and Egyptian musicians and a tour in the eastern U.S with Alvarius B, where he’ll be playing solo guitar and Ud (Arabic Lute). 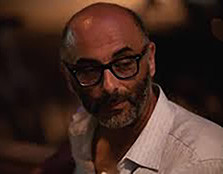