Micheline Coulombe Saint-Marcoux’s works are out there! They have been performed in concert in Avignon, Bonn, Bourges, Edmonton, Luxembourg, Montigny-lès-Metz, Montréal, Paris, Quebec City, Royan, Séville, Toronto and Vancouver…

Micheline Coulombe Saint-Marcoux was born in Notre-Dame-de-la-Doré, in the Lac Saint-Jean region of Québec, on August 9, 1938. Her childhood, close to nature and filled with family song, was to influence her later electroacoustic work in its exploration of the voice (Arksalalartôq) and its evocation of natural landscapes (Moustières).

To extend her musical training, she moved to Montréal in 1958 to study at the Institut Cardinal-Léger, with Yvonne Hubert. She then studied composition with Claude Champagne at the École de musique Vincent-d’Indy, from 1960 to ’63, and with Clermont Pépin at the Conservatoire de musique de Montréal, from 1963 to ’67. In October 1982, in an interview with Lyse Richer (1984), Coulombe Saint-Marcoux credited Pépin with developing her organization of compositional form, and said of Champagne that he gave her the opportunity to write openly what she had been doing for a long time in secret.

In 1965, she was a student of Tony Aubin at the Académie internationale d’été de Nice (France) where she was awarded the Prix René-Poire, her first composition prize. In 1967, she graduated from the Conservatoire de musique de Montréal with a first prize in composition with Modulaire, a work for orchestra and ondes Martenot, and the Académie de musique de Québec awarded her the Prix d’Europe (in composition), the first time it had been awarded to a woman.

In 1968, at the suggestion of Iannis Xenakis, she went to Paris to study electroacoustic music with the Groupe de recherches musicales (GRM), working with François Bayle, Guy Reibel and Henri Chiarucci. She also attended Pierre Schaeffer’s course at the Conservatoire national supérieur de musique de Paris, and had private composition lessons with Gilbert Amy and Jean-Pierre Guézec. She remembers learning different aspects of composition from each of these artists, noting particularly Guézec’s creative approach to voice, Schaeffer’s vision of musical phenomena, Reibel’s technical knowledge, Parmegiani’s exploration of relationships between sound and image, Amy’s logical organization of composition, and Bayle’s poetic approach to sound.

When Coulombe Saint-Marcoux returned to Montréal in July 1971, she joined the Conservatoire de musique de Montréal. She taught there until her death in 1985. For the time of her arrival, she worked with great determination to develop an electroacoustic music studio, collaborating with colleagues Otto Joachim and Gilles Tremblay. In 1971 she formed the ensemble Polycousmie with three Montréal percussionists (Pierre Béluse, Guy Lachapelle and Robert Leroux) to integrate percussion and electroacoustic music with dance. In April 1972, she organized the Carrefour électroacoustique (Electroacoustic Crossroads) event with journalist Jacques Thériault [three evenings of electroacoustic music at Galerie III in Old Montréal, in collaboration with the dance companies Groupe de la Place royale and Groupe Nouvelle Aire], just one of the many activities that she engaged in with the aim of making electroacoustic music better known.

Coulombe Saint-Marcoux’s approach to electroacoustic work influenced her orchestral compositions, particularly through her fascination with spatiality and sound trajectory. Hétéromorphie, which was commissioned and first performed by the Orchestre symphonique de Montréal (OSM) in 1970, arranges the orchestra in four sections. The movements of sounds produced by these four sections are thus clearly delineated in space. The details of sounds are made apparent and then disappear, as in the movements of a mobile.

She became interested in musical theatre, and wanted to work towards the creation of a professional organization that would bring together artists from many disciplines. Coulombe Saint-Marcoux frequently used ondes Martenot in her compositions, and was interested in the use of the human voice: many of her later works included texts by several Québec poets. She was also profoundly influenced by visual art, and often considered her work to be following the same themes as those followed by painters of her acquaintance, such as Marcelle Ferron.

Micheline Coulombe Saint-Marcoux died at a relatively early age [at 46] of a brain tumour on February 2, 1985: “The composer’s social commitment comes about first at the personal level. When she is, for a start, very conscious of the problems inherent in her art, and very convinced of its necessity, at that moment she adopts what I would call a ‘decidedly revolutionary’ attitude” (Richer 1984: 22). 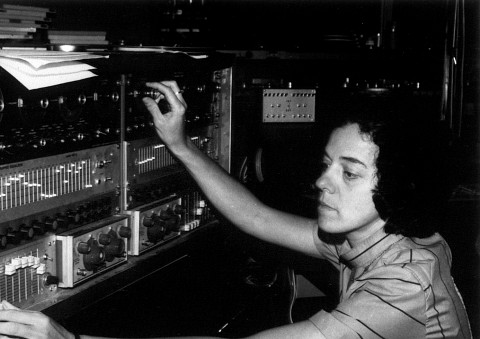